Walking towards the disputed olive
orchard.

It turns out that Teqoa farmers have been denied access to their olive trees for between ten and seven years. No doubt the situation came to a crisis with well known and technically unsolved murder of Koby Mandell and Yosef Ishran next to the settlement. An unsolved murder, is however, a distant and mostly irrelevant excuse to steal land from some farmers and today, the olive orchardists are going to re-claim their land and their trees. We are here to accompany them into the forbidden zone. The presence of foreigners makes the farmers feel more secure against illegal violence from the military and settlers.

Digging the soil around the olive
trees, a typical cultivation practice.

The trees are next to an “outpost”: a small, guarded, colony of Israeli citizens inside Palestine. In the past few years, when farmers have tried tend their trees they have been threatened by the military. A decision in 2006 by Israel’s Supreme Court makes this sort of denial of land illegal even by Israeli law, but the practice is still widespread.

Our actual walk onto the property is tense. We are first met by a private security guard wielding an assault rifle and a hand gun. Fortunately, all he is using at the moment is his little point and shoot camera, aggressively shoving it into people’s faces. He seems rather unhappy. We work on the trees here for a while, removing lower branches, inspecting the trees and cultivating beneath them. Our work is unfocused and sporadic; it’s hard to work in such an environment. But the priority right now is to establish access to the land politically.

Soon, we move on from this patch, getting closer to the outpost. The military comes towards us, attempting to block us from going forward but there are too many of us, and we simply walk around them. The military is clearly aligned with the settlers but they can see that we are a non-violent bunch and aren’t too nervous. Also, the media here is strong enough that the military knows they must show restraint in a situation like this, with so many cameras around. In fact, one of the Palestinian activists with us is clearly more comfortable speaking to the military than the settlers, who come a few minutes later. Some settlers are armed with cameras, some with guns.

Inspecting an olive tree which has died
back because of lack of care.

Among the farmers re-claiming their land, different people are pulling in different directions. Some want to go through the legal procedures with help from the Israeli groups Taayush and Rabbis for Human Rights. Others want to negotiate with the soldiers directly. The farmers who have initiated this campaign are not a disciplined political group. They are just normal people trying to make a living but losing their land piece by piece.

A tree which has finished being
pruned.

The situation here in the West Bank, Palestine, is complex in it’s details, but fundamentally simple. It is a colonization effort by a superior military power. Palestinian arabs have been living here for many generations. Israelis want to take the land for their own purposes. The Israelis have a large and well funded military, so they take it. The situation has many twists and turns, but at it’s heart it is easily recognizable as colonization. 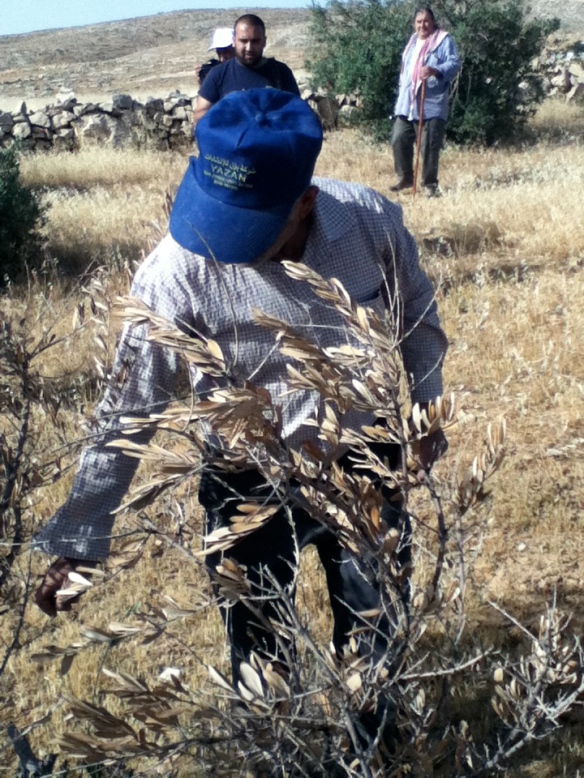 A private, armed security guard
records video on behalf of the settlers.

The West Bank is an area to the East of Israel, on the west side of the Jordan River. Israel did not, for one reason or another, conquer this territory outright with their military and kicking people out entirely. Instead, they are implementing a slower policy of putting civilians onto the land to create settlements, slowly forcing out the local population. This is widely recognized as violating one of the Geneva Conventions. Israel does not seem to mind. 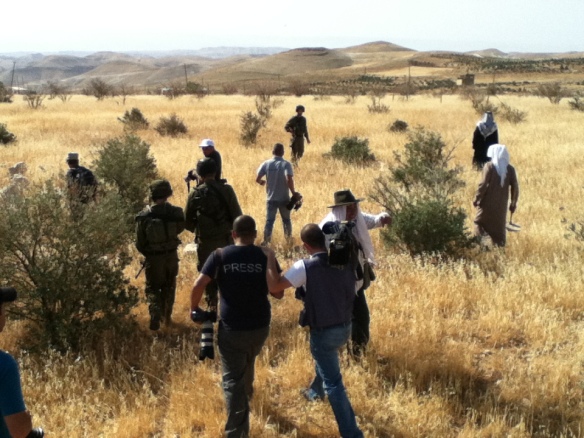 People are pushed away from the boundary of the settlements and outposts by an ad-hoc effort of both settlers and military who run continuous harassment and intimidation against the landowners. One of the traditional ways of doing this is to claim a “security zone” around an outpost or settlement, and physically deny access to the landowners. If the land is left untended for long enough then, under Israel’s current laws, it becomes state land. 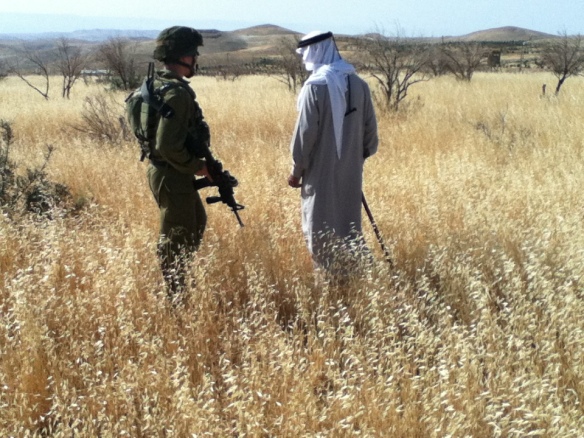 An israeli soldier speaks to one of the farmers.

Having visited the trees today, and documented the visit well, the farmers have temporarily defended themselves against this appropriation of their land by the Israeli state. However, they still have a long way to go to be able to work normally on their trees. About three hours after entering the property, the military ejects the farmers from their land by creating a temporarily closed military zone, which gives them increased authority to shoot and arrest people. That’s enough for one visit, and we move off the property. 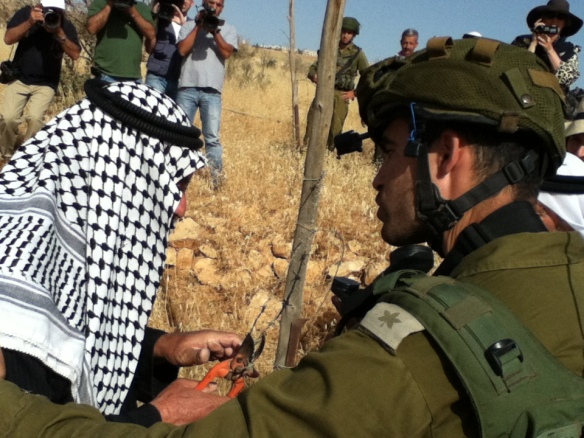 A farmer faces down a soldier and cuts through the barbed wire fence that his new neighbor has erected on his land.

A little further south is a town called Susya. After the action at Teqoa, I hitch a ride to Susya with an organization called Taayush. They are a group of Israelis who are highly critical of their government and every week make trips into the West Bank to stand in solidarity with Palestinians. Often, Taayushers help with physical work, coming prepared with work gloves, hats and plenty of water. Today, in Susia, we are harvesting wheat from a newly re-claimed piece of land. This is the first harvest since winning the land back from an aggressive claim by a settler.

Palestinians and Israelis work
together to cut the dead wood off of a
damaged (from forced neglect) olive
tree. The tree is coming back from the
roots. A well cared for olive tree can live
for over 2000 years.

The land was claimed in a curious way when a settler simply put up a fence around it and planted grape vines. This technique of planting something in order to help establish legitimacy to land is common here. Unfortunately for the would-be grape farmer, in this case, he was unable to obtain free land simply by planting grapes on it. After going to (Israeli) court and contesting the land grab, the Palestinians were given their land back. The grape vines were removed and wheat planted instead.

A Palestinian man surveys the
property

Susya has a tough past, having been destroyed by the military in 2002. Most, but not all, of the families returned and built the tents which they currently live in. Being situated between an outpost, a military base, and a cordoned-off archeological site they are in a difficult situation. Their stories of attacks against them are legion. They range from midnight firebombings and rifle attacks to settler’s sheep being let in to eat the baby olive trees. The military has even collapsed some of their caves as part of the campaign to intimidate them into leaving their property. Today, however, they celebrate their victory and collect the wheat, putting it into a big wagon. Probably they will thresh it when the neighborhood’s portable tractor-powered threshing machine is available. I notice that some creative person in the village has made their own small threshing machine. 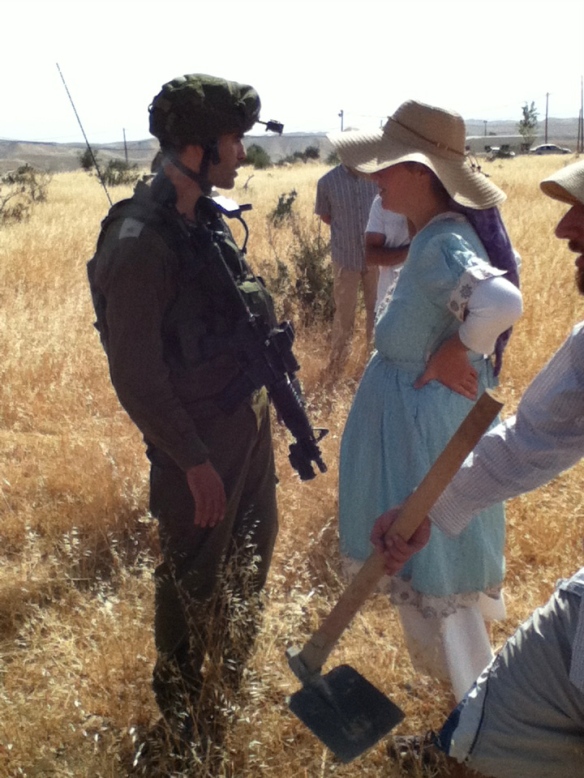 A settler speaks to a soldier.

A victory like that recently won in Susya to retrieve their wheat field does not come without backlash. In this case, the backlash is both both vindictive and political. A few days after the harvest, a nearby farmer’s grain was burned by saboteurs as it lie waiting for threshing in the field. A bit more than a week afterwards, the Israeli military has announced that they are going to destroy 42 of the buildings (well, tents actually) in Susya. This is most of the town. They have a culture of resistance, however, and are not easy to intimidate. They will fight back, nonviolently.

All of this fighting really gets me thinking. What is the basis for a legitimate claim to a piece of land? Some people think that if you have been there long enough, you own the land. To others, you must “work” it. Around here, a lot of people claim that God gave it to them. In reality, it often seems to come down to who has the best military. Who has the best military is, today, an intricate matter of international political support. That is where you, dear reader, come into the picture. Like most totalitarian situations, the occupation of the West Bank will be largely perpetuated or stopped by the opinion and small, collected, actions of people watching the situation here.

Taayush volunteers gather wheat near Susya. In the foreground, a grape vine
refuses to give up and sprouts again among the wheat.