This weekend I have the great pleasure of spending time at the Canadian Association for Food Studies conference, “A Fork in the Road: Crossroads for Food Studies,” where some of Canada’s most respected scholars in food studies gather in collaboration with new and emerging scholars to share ideas, encourage research, and celebrate the work being done in this fascinating, interdisciplinary, and rather new field.

While I situate myself outside of the Academy these days, I feel marvellously comfortable in this setting, realizing that these people, despite reputations or accomplishments, are people just like me, striving to make change and ignite inspiration in the way that they best know how.  One conference delegate put it charmingly: that since they are scholars concerned with sustainability, their focus is on their students, on their work, and not on their legacies, making them more approachable, and more human.

As the conference begins, I have had the chance to see the screening of a film from a community-research partnership called ““Wanorazi Yumneze (Awakening Spirit)” about the situation of indigenous communities in Northern Alberta and Saskatchewan in relation to the natural environment, ‘development,’ tradition, and the precarious situation of food and health.   It’s a phenomenal exploration of holistic community practise, with very hard hitting messages about the importance of centralizing the natural world within our human worlds, and being respectful of all life, which nourishes us as we nourish it.  Some of the more striking images of the film include moose organs filled with cysts and growths, exemplifying the challenges of an increasingly toxic environment for a people reliant upon the land for their food and life.  Check out the trailer here:

This morning, I revelled in the chaotic beauty that is the St. Jacob’s Farmers’ Market, in which many Mennonite (and non-Mennonite) farmers and families vend their delicious produce and baked goods.  Several of us were tasked with buying finger food for a reception for the day’s end of the conference, a challenge, knowing the crowd of eaters is one of extensive food knowledge and good taste!  Here’s a little snapshot of the market: 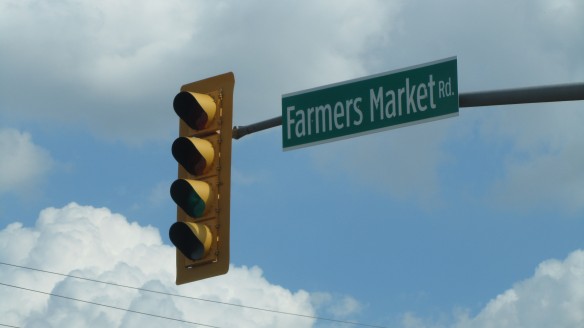 The road on which the farmers market (and the local Walmart) is located!

Can it really be that fiddleheads are come and gone already? I think I only really got in one good fiddlehead meal this spring.

If only we had had the ability to prep food at the conference venue, we would have bought bunches of this beautiful rhubarb! Alas… we ended up finding some Local Food Plus certified cherry tomatoes, sold through the Elmira Produce Auction Co-operative, really crisp and delicious apples, lots of local strawberries and sweet peas, and some of this fellow’s hummus and pita: 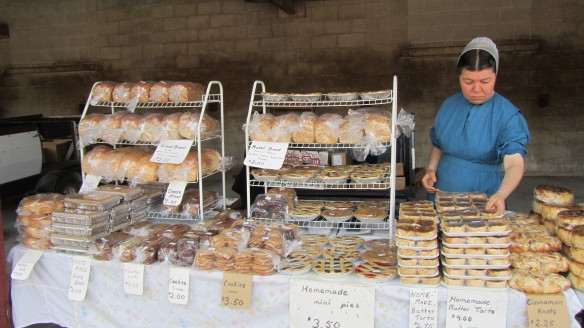 This woman also sold us some trays of butter tarts, which were devoured by ravenous conference delegates.

The meat section of the market was quite impressive, but to me, the most interesting part of it was the baskets of items for dogs like this one filled with pigs’ ears.

This young woman allowed me to take her photo with her pickles on a stick, which looked as though they would make quite a gustatory feat for some brave soul (early on a Saturday morning). 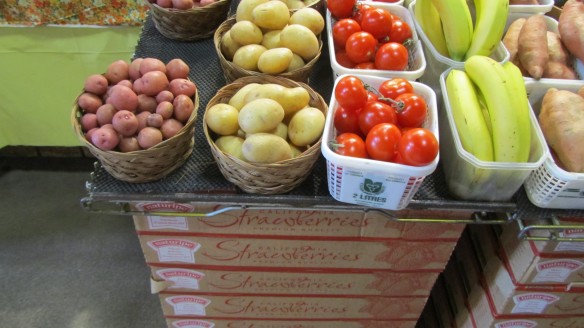 And I kept being struck by this idea of what the farmers’ market represents, as a place where (some) people come to eat their values, while many of the vendors are intermediaries selling produce from the Ontario Food Terminal.  This vendor clearly had repackaged a lot of vegetables and fruit from exotic locales, and in a sense gave it all a down-home country feeling through the use of plastic and wicker pint boxes.  Does anyone get fooled into thinking these bananas and avocados are locally grown?  As one professor puts it, people want to consume the idea of the countryside almost just as much, if not more, than they want to consume the food it produces.  Another food activist puts it, “everyone wants to touch a farmer.”

The woman selling these frozen berries told us that they were largely from Quebec, Saskatoon, and the Maritimes, but labelled (not even packaged) locally in New Hamburg.  Your average consumer needs to arrive equipped with a lot of specific questions to really get to the bottom of where their farmers source their food.

Pickled everything! From scapes to eggs to asparagus to beets, this stall was a feast for the eyes.

And beyond the pickles, there were loads of preserves.  What delightful colours!

It was hard to decide, at a stall filled with cherries (not yet in season in Ontario), hot house sweet peppers, and citrus, if asparagus marked as “local” would truly be so.  And when we inquired, the answers were vague, and so we were led to believe that perhaps local meant Ontario Food Terminal produce (coming from who knows where prior to that)…? 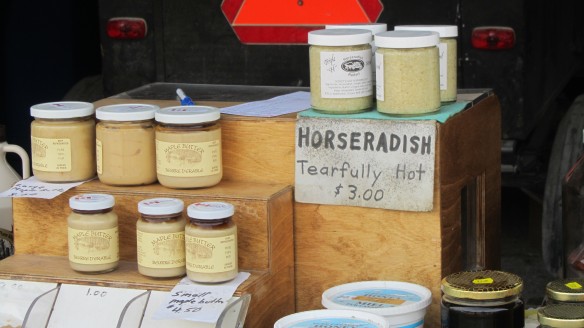 And to give you a sense of the fascinating dichotomies of this town, here is a horse and buggy waiting patiently at the traffic light, with a bicycle hitched to the top, and cars lined up behind.  In fact, so common is this mode of transportation that the farmers market even had signs… 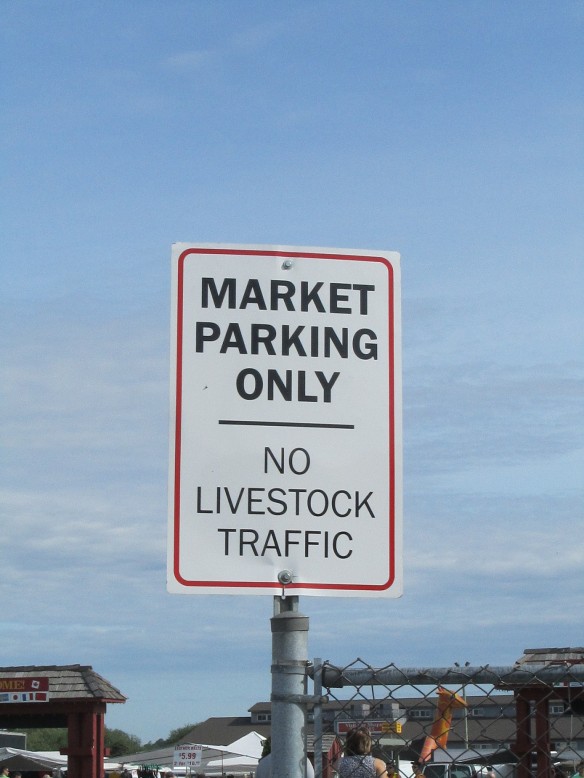 After the market, the afternoon of the conference was a chance to soak in paper presentations, and I attended a session on Redirecting Resources, followed by one on Innovation (check out the conference program here), and finally a student/new researcher session that allowed us to share experiences and talk about some difficult questions such as ‘imposter syndrome’ (ie. I’m not the expert you think I am!), work-life balance, or transitioning in and out of academia.  The evening ended formally with a launch of several fantastic new books from the food research community, including Food by Jennifer Clapp, Hunger in the Balance: The New Politics of International Food Aid, also by Jennifer Clapp, A Pessimist’s Hope: Food and the Ecological Crisis, by Pat Kerans, and Food Sovereignty in Canada: Creating Just and Sustainable Food Systems, ed. Annette Aurélie Desmarais (with Nettie Wiebe and Hannah Wittman).  Informally, many delegates wrapped up the night over a local brew and more great conversation at the graduate students’ pub.

The conference has really only just begun, and I’m brimming with ideas and questions, and wondering about all of the bridges to be built between the many complex ideas circulating (and the rich fodder this provides for the upcoming PeaceMeal Workshop!).  I end the day with a sense of support, connectedness, and solidarity, a fantastic new book in my bag, a bellyful of good food, and a lighter heart about the state of the world, knowing so many forward-thinking, compassionate, and concerned people are working within it.

More to come about the conference as it progresses…

4 thoughts on “A Fork in the Road: Canadian Association for Food Studies”