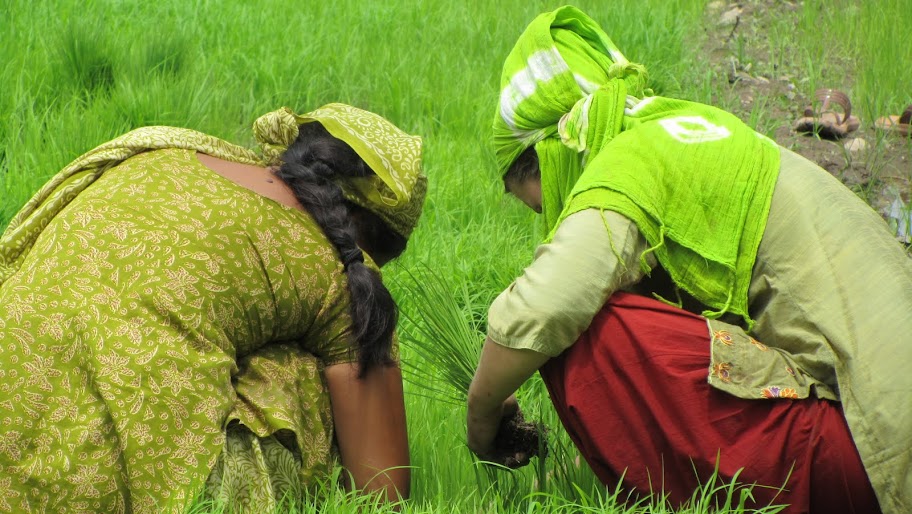 Environmental activist Vandana Shiva has been working to build an organic agriculture movement across India for the past 22 years through the Navdanya Trust, an organization that she founded and directs. She recently spoke with Worldwatch India Fellow Anna da Costa about the connections between sustainable agriculture, climate change, and poverty alleviation.

What led you to work on the environment, and particularly on sustainable agriculture?

The big transition to agriculture really came in 1984, which was incidentally a very Orwellian year for me. We had the invasion of the Golden Temple as a result of the extremist terrorist movement that had grown in Punjab. In response and retaliation, [then Prime Minister] Indira Gandhi was assassinated. People think this violence began with Al Qaeda, but terrorism has been around for a while, and one of the first extremist responses was in fact to the Green Revolution [the 20th-century movement to boost agricultural yields through increased use of chemical fertilizers and other inputs] in Punjab. A little later, we had the Bhopal disaster, the worst industrial disaster from a pesticide plant in history.

Could you describe the work and philosophy of your organization, Navdanya?

The first element of Navdanya’s philosophy is to establish an agriculture at peace with nature – that leaves farmers in peace and doesn’t push them into the kind of violence we saw in Punjab in the 1980s or to the new, self-directed violence that we have seen since then in the form of farmer suicides.

Second is the celebration of diversity. Biodiverse systems produce more nutrition per acre than the most intensive industrial systems and also have a higher land-equivalent ratio. That means you can grow much more on the same piece of land because you are creating symbiotic relationships between the plants.

Third is the importance of keeping in the commons that which belongs to the commons, like biodiversity and knowledge. The dominant market philosophy today is based on competition, but to my mind, the only things that sustain themselves in the long term are solidarity economies – economies based on mutual trust, on give and take.

Our work has grown out of this three-tiered philosophy. We are working to build non-violent, biodiverse agriculture  -namely, organic farming. We have trained nearly half a million farmers across the country either through large camps or through attendance at our schools. We run teacher training and research on farms and have also set up freely accessible community seed banks, with at least 50 around the country now. We also help the farmers with direct marketing and fair trade of their wonderful produce.

What are your views on the work of M.S. Swaminathan, the founding father of India’s  Green Revolution, and what is needed now to deal with the agricultural challenges that India faces?

The interesting thing is that although Dr. Swaminathan brought the Green Revolution to India, we have since presented together on various platforms, including the Asian-Organic movement, where we have both given keynote addresses on organic farming. Right now, Dr. Swaminathan is both the green revolutionary with chemicals and the green revolutionary without chemicals! [she laughs]

I believe there are three reasons why we need to go beyond the Green Revolution logic. Firstly, chemical fertilizers and pesticides don’t come free and are a major reason for indebtedness, which itself leads to loss of farms, land, and entitlement to food. Secondly, chemical, or industrial, agriculture is hugely water demanding, and we cannot afford it in terms of the water crisis we face. One can grow crops organically without that level of water wastage. The third, increasingly compelling, reason now is the role of chemical agriculture – Green Revolution agriculture – in propagating climate change. The need of the hour is an authentic agro-ecological green revolution.

Navdanya now works on climate change as well as agriculture. Why is this important, especially when a lot of people feel that climate change is taking attention away from other pressing domestic causes?

There is much greater intensity, frequency, and velocity of cyclones now.  Cyclone Aila this May killed [at least] 125 people and devastated the eastern coast [of India]. We are also seeing far higher levels of drought and flooding with, for example, flash floods in the deserts of Ladakh and Rajasthan, in areas where there is normally no rain, and the devastating Mumbai floods in 2005. So climate change is very much a domestic threat to the poor, whose very survival is threatened by these events.

The second reason we must address climate change domestically is that if we do not, we risk adopting policies that make climate change worse – for example, through building an agriculture that makes us more vulnerable, or the rapid expansion of highways without proper impact assessments.

So what kind of policy change would you advocate in the agricultural sector for India?

First, we need to move away from fossil fuel dependence in our agriculture. Chemical fertilizers are fossil fuel-based and a major contributor of nitrogen oxide as a greenhouse gas. They also make the soil much more vulnerable to the smallest drought or flood. Through moving toward a biodiversity-based organic farming paradigm, farmer indebtedness and carbon emissions from agriculture would be reduced and climate change adaptation through increasing crop resilience would be supported. In addition to all of these benefits, a biodiverse system would provide raw materials for artisanal production, and an agriculture that is linked to crafts can also generate huge amounts of employment in a country like India. That is the way to solve the employment crisis.

To do this, however, the rights of farmers and rural communities to their resources must be ensured. Farmers need both land security and seed security, and in terms of policy this means getting away from intellectual property rights and patenting of the kind that has increased the seed price of cotton from 7 Rupees to 17,000 Rupees for Bt cotton and has led to a wave of suicides – 200,000 farmer suicides so far. We need to keep seed as a common property, as a common public good.

We also need to strengthen the smallholder by guaranteeing a fair market, a fair price. Right now the share of public money [to agriculture] is going totally as subsidies to industries that are environmentally destructive and non-sustainable. Investments in agriculture have been totally slashed and those investments need to be brought back. Policymakers absolutely have a role in protecting the resource rights of rural producers and in providing a share in the pie of public money.

Why are sustainable agriculture and forestry of particular importance as a solution for India?

Through organic farming, agroforestry, and forest regeneration, we would not only turn our soil and our vegetation into a major carbon sink [which absorbs and stores carbon from the atmosphere in a stable form], we would directly address the poverty problem too. When you seriously address climate change, you do the very things that reduce poverty and hunger: for example, using scarce resources to produce more food.

By intensifying biodiversity, you intensify biological output per acre, which means your productivity is going up, your hunger is being addressed, but more than hunger, your employment issues are being addressed. We need a biological and ecological renewal of India. India is one of the most densely populated countries in the world. We need to create enough work for all the hands in this country.

Poverty and climate change have the same solution. The model that displaces people from this work is inappropriate anywhere but it is doubly inappropriate in a country like India because not only does fossil fuel intensity displace people, it contributes to climate change. People, land, biodiversity, that’s the message.

Anna da Costa is a Worldwatch Institute fellow based in New Delhi.